Yesterday I had a blood test prior to having my six-monthly infusion next week. If I still haven't heard about this scan I'm meant to be having on my arm I will ask the nurses if they will ask my oncologist to make enquiries and speed it up. I had persuaded hubby we could leave the car at the hospital and catch a bus and go and have a meal taking Tilly to the dog-friendly place where she embarrassed us so much when she was a six month old pup last year. Unfortunately we just missed the bus so went in the car instead, had our meal and Tilly was as good as gold but I'm glad we were able to go home in the car instead of waiting for buses as the day turned out to be very warm indeed.

So today I took Tilly to the canine physiotherapy place for the one and a half hour session I booked last week. It was good and Tilly really enjoyed herself having lots of fusses and treats. Tilly showed no sign of nervousness while we were there and her tail never stopped wagging and although the lady isn't a dog trainer she gave me lots of useful tips to help with Tilly's separation anxiety. She used one of these PEMF mats on the floor for Tilly to lie on and I'm not really sure whether that will be beneficial or not. She used a pet remedy spray on my hands and I just cupped Tilly's face in my hands and that really worked, Tilly just lay down quietly so that's something I am going to invest in for sure. I learned the best way to massage her and that's something we will both enjoy at home each day. I've booked another one hour session for next week and it'll be worth a try so long as I work on her issues at home in the meantime.

While I was being educated hubby went for yet another meal out. He ordered fish, chips and peas and tartar sauce with bread and butter. Unfortunately he was shocked to find some mould on the bread but the staff couldn't have been more apologetic and offered him either a free dessert or a cup of coffee to compensate so he chose to have a coffee what with him being diabetic. When Tilly and I joined him later after the physio session I ordered coffee for us both before sitting for a short while on the garden swing enjoying the sunshine in the grounds of the pub. I want one of these swings for our garden when we have our new patio laid in a few weeks time. Whether I'll actually buy one when the time comes I have no idea, but it was very relaxing just sitting idling the time away. 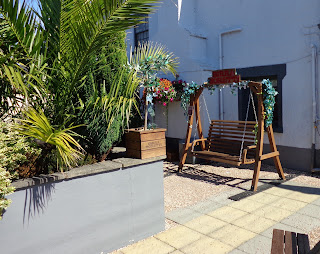 A whole week has flown past without a blog post from me but not much has been happening. I watched the whole of the Queen's funeral on M... 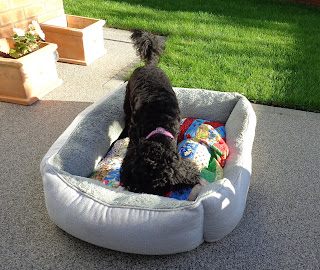