Just a few happenings this week. I'd ordered a dress online but silly me chose a long length and it was far too long not realising the model was probably much taller than I am. I don't have a single dress in my wardrobe as I mostly live in trousers although I do have a few skirts but rarely wear those. I was looking for a change and something summery so will keep looking We decided to return it to the store on the retail park and while we were out decided to have a meal in a dog-friendly pub and very nice it was too. Tilly was very well behaved and I was pleased about that, she stayed on the floor and only barked once when a guy put a huge rucksack on his back as he was about to leave, she must have been protecting us in her way.

I have a painful arm at the moment and I think they call it golfer's elbow even though I don't play golf. I think Tilly must have pulled me too much while on her extending lead. She's OK once it's at its maximum length while she's busy mooching in the sand dunes but reaching there through the car park she pulls me until she reaches her destination.

Oh and there was a birthday. Hubby told me not to bother go looking for birthday cards so I had a brainwave and recycled last year's cards and with black and green marker pens I managed to update the card from Tilly :) We love the drawings on Yuko's card, she always adds them as her signature and you can see that mother and son are very similar :) Of course there had to be a cake as well and I'd ordered an extremely white chocolatey cake this year. 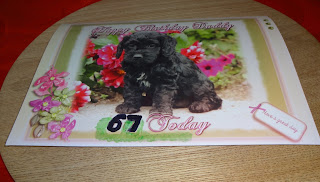 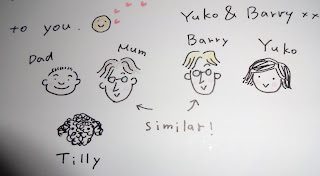 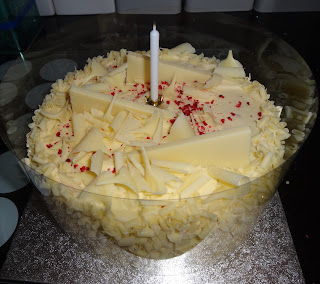 Also a very strange thing happened this week. I'm  a member of a private group on Face book or whatever they call themselves now. I like to check in to read any new posts and watch the videos from the dog training classes. I was looking at the video from the fun day of this latest term of which I chose not to attend and I suddenly got blocked for no good reason. They suspended my account and wanted my phone number so I entered that giving my PAYG mobile number and then they wanted a photo of me. I no longer post my photo online so they had to make do with an old one and then 24 hours later they unblocked my account. No idea what that was all about but they can stick their Faceache now :)