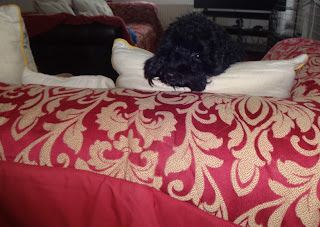 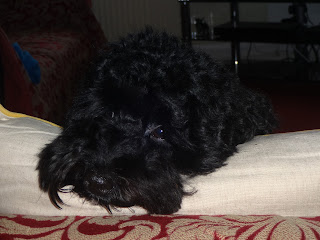 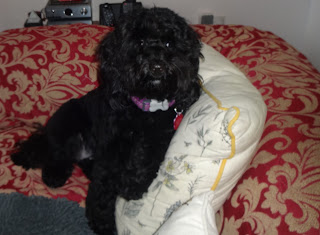 We took Tilly to the grooming parlour yesterday. Her eight-weekly appointments seem to come round very quickly but her fur does grow quickly and grows very curly too but that's her poodle genes. I'm beginning to think the black cockapoo that Tilly played with last time is the salon owner's dog as it was there again. When I went to collect Tilly I could see Tilly's black fur covering the floor and the owner told me it doesn't usually look like that so I imagine Tilly had been busy fooling around with the other cockapoo or trying to grab the sweeping brush and mop as she does at home. I'm very happy they don't use crates and the owner had asked me how I wanted her trimmed and how much to take off. I asked that they don't give her the fan tail this time as without going into too much detail Tilly isn't keen on having her bottom wiped. Her tail still looks lovely though :)

Hubby and I took the opportunity to kill time in the nearby pub while waiting for Tilly to be groomed. It's a nice posh place with a good atmosphere and we just had a glass of diet coke each. Nobody bothered us for the hour and a half we spent in there, hubby read his newspaper and I'd bought a Sudoku puzzle book and managed to complete the first two puzzles but the prize puzzle was much more difficult but I've completed that at home and entered the competition.

It's turned cold again and we need the central heating back on and coats to go out and Tilly wore hers on her walk today seeing as she's had her fur shaved off. I've just put away the grocery delivery and you may remember I made a compost crumble  last winter. I recently watched a cookery programme where they made a peach and chocolate crumble  and served it with ice cream and we said that sounded delicious. I don't do much baking anymore so ordered a tin of peach slices and a bar of good dark chocolate and will make a crumble topping but I'll serve it with custard as a warming dessert this evening. I looked at my blog post for the crumble I made last year when I wrote about watching mindless television programmes and doing sudoku puzzles, not much has changed then :-)