I haven't been walking Tilly for the last ten days or so following her operation so I've been doing some family history research instead.

I'm not intending renewing my annual subscription to the ancestry site in March as I've done as much as I want to on my own family tree and it can be an expensive and time consuming pastime. I was also disappointed when the 1921 census was released earlier this month and is not available within any subscription or free to view online. Anyway last week I turned my attention back to my husband's family. I was wanting to discover why and when they went to live in the West Midlands and then returned to live in this area of Wales.

My husband's maternal grandparents were born in Wrexham and that side of his family has been incredibly difficult to research as it is full of the most common of Welsh surnames. Having sent for a couple of certificates it appears that my husband's grandfather lived or spent most of his time with his widowed grandmother and not his parents who lived in the same road. In 1911 and still with his grandmother he was working as a bottler in a wine store. When he married in 1920 and again on the 1921 census he had the same occupation and I was pleased to discover the name of his employer but not home addresses which aren't included on the census forms. 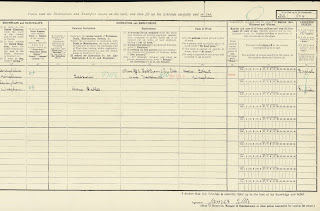 I found an article and photo online and this is where hubby's grandfather would have most probably still been working in 1933. In the foreground is a lorry belonging to the wine merchants in Wrexham. George and Alfred Brown were two bothers who had businesses in Cheshire, Shropshire and North Wales including Wrexham and Llandudno. When Alfred Brown died aged 91 in 1939 they had been trading for 70 years.  I have asked permission from the Wrexham history site to post this photo here on my blog. 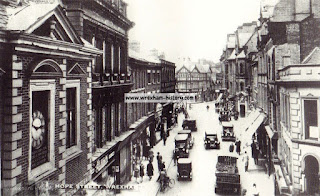 Husband's grandparents had four children together, three including my husband's mother were born in Wales and the youngest being born in 1936 in the West Midlands. We have no idea when exactly the family returned to this area of Wales but we do know that husband's grandfather returned to work in the pub and brewery trade.

My husband's mother had met  a soldier and married in Birmingham when she was just seventeen years old and in 1939 living with her in-laws. We do know for certain that husband's older brothers were born in Birmingham although my husband was born in Wales. Most probably the family moved here to be near husband's grandparents.

There seems to be a similar story in my family. Both sets of my grandparents and their families were in Lancashire in 1939 apart from my mother's brother who was in a home for the blind in north Wales. So it seems that following the death of my maternal grandfather in late 1939 most of the family came to live in Wales apart from my parents but I know exactly when we came to live here. My blind uncle later married and went to live in Leeds.

If only we could go back in time and ask the questions we should have asked but never did. There's very few people to ask now so we can only rely on the censuses to give us the backstories.