So today was the final day at dog training class and it was the fun day for the Saturday puppy and beginners classes combined. There must have been fifteen or sixteen dogs there and I think Tilly found it a bit overwhelming as she was much more bouncy than usual. Unfortunately our trainer was unwell and didn't attend so the class was organised by the two trainers from the puppy classes.

I dressed Tilly in her bandana and snowdog outfit at home to get her used to wearing it. It was difficult to take a good photo of her as she wasn't too happy until she got used to it. I wore my Christmas jumper and socks but she wasn't too bothered what I was wearing. 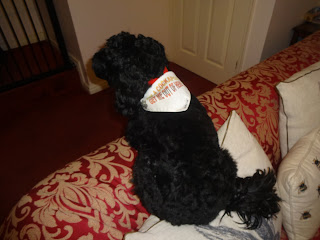 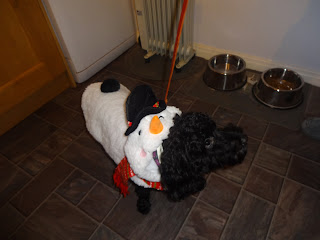 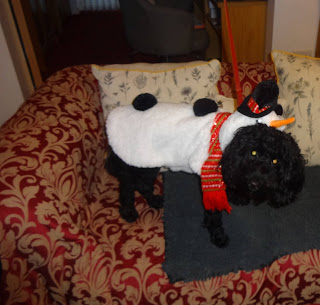 Tilly didn't win the fancy dress competition and it was a good turn out of outfits. She did win first prize for best tricks though and did her party piece really well. She did her shake a paw, down and rollover routine and then she did her twirls standing on her two back legs. I was so proud of her and she won a rosette and a big bag of gravy bones and she does love gravy bones. 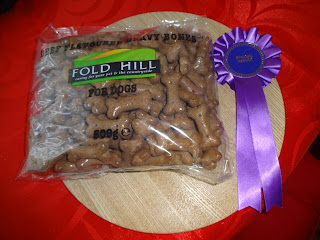 Then they played a game of musical mats and Tilly and I got down to just five remaining mats  before we were forced out. One of my new friends commented I must have been exhausted after all that walking around and I actually was glad to sit down. They played a game of Simon Says but Tilly wasn't having any of that she'd decided she wasn't going to play that game. At the end of the games all the puppies were given their certificates as we were on the first course and then it was time to leave.

I had a quick word with Millie's dad and Tilly's little cockapoo lookalike who'd we'd met on the very first class but as Millie had been ill she's had to do the puppy class all over again and it was nice to see her again. I asked if I could take a last photo of her and  said we wouldn't be doing any more classes and it had been nice while it lasted and we'd learned a lot along the way. All good things must come to an end. 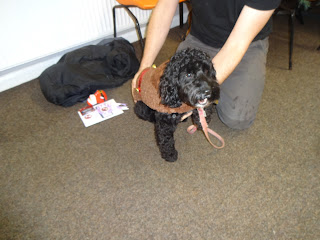