The weather has been very changeable following the weekend's storm. It was awful yesterday, very windy  and rained for most of the day. In contrast it was calm on Tuesday and while out on a walk with Tilly I saw someone fixing their roof. I was able to take photos from the back and the front of the house and I couldn't resist taking a couple of photos as my heart was in my mouth for him up there like that. There wasn't  even anyone holding the ladder for him. 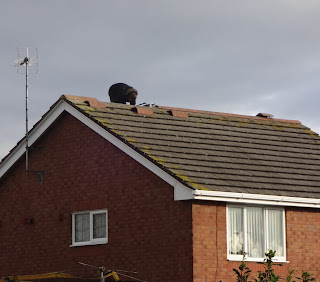 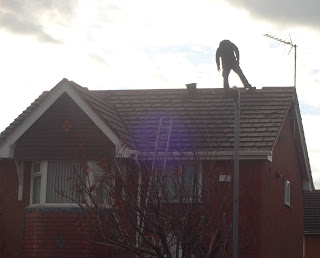 I'd been out trying to find where a parcel of mine had been delivered. I'd checked my emails before leaving the house only to discover the parcel was showing as having been delivered but not to me it hadn't. There is a street with a similar name and I tried there first and the man who answered the door had taken in the parcel thinking it was for him. He was a night shift worker and not only had the delivery person disturbed his sleep but so had I an hour or so later. I made my feelings known to the delivery company and did receive an apology and I'd apologised to the man who had my parcel. I have it now so no harm done.

I saw a nice sight while out walking Tilly, the odd looking sheep all in a line making there way through a gap in the fence, it made me smile. 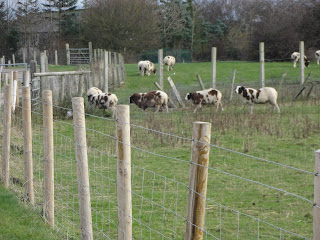 I'm pleased to say I've checked that roof again today and the man looks like he did a good job, I just hope he completed it with no mishaps.

Once again nothing much to report just my daily walks with Tilly. The other day I took her to the harbour and walking alongside the river  w... 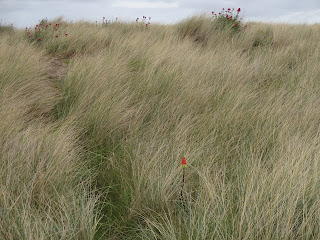