A busy but nice week 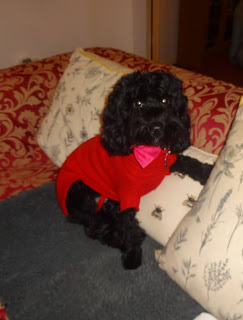 Posing for the camera

If last week was a funny old week this one has been a strange and busy one for us. Tuesday hubby went for his booster jab and thankfully he hasn't had any bad side effects apart from a sore arm. His jab was given at our GP's surgery and it wasn't the hassle that going for mine on a business park was. We have had different vaccines and that's the reason for the different places and reactions I expect.

Wednesday was Tilly's dog grooming appointment at the new to us place but prior to going the groomer phoned and gave me the opportunity to reschedule the appointment but I chose to go instead. After Tilly had been groomed she closed the shop for ten days as her husband had tested positive for covid although her test had proved to be negative. I figured we have enough antibodies to be immune and I hope that is the case but I'm not worried. Tilly had needed the grooming session as it had been quite a while since her last appointment elsewhere. I am happy with the new place but the groomer did say Tilly was nervous and frightened. She'll be going again to have a pre-Christmas pamper to get her used to going there. The staff are really nice, friendly and professional but I did feel sorry for them as they were having a stressful day having to rearrange about forty appointments she said.

While Tilly was with the groomer hubby and I went to a nearby bar and restaurant and enjoyed a delicious meal. We both had sirloin steak and chips and hubby exchanged his mushrooms for my onion rings. We both had desserts and mine was a raspberry pavlova, hubby had a chocolate brownie both with ice cream. I can't remember the last time we'd enjoyed such a nice meal out. While we were eating our meal we noticed a diner and his dog leaving the place so I asked the waitress if it was dog-friendly and she said it was in the bar area where we were seated but not upstairs in the restaurant. We'd been asked if we'd pre-booked but we hadn't but they didn't mind that particular day with it being mid-week and quiet and the weather was dreadful but we will definitely return and book in advance next time.

Yesterday  the car had to go in for a full service and annual MOT. The staff at the dealership are really nice and normally they give us a lift to a nearby town and come and pick us up when our car is ready to collect. Having Tilly with us we decided to use the bus, a first for Tilly and she was really well behaved, sat on my knee as good as gold. The only thing I bought was a jumper for Tilly as I figured she would feel the cold having been so recently groomed. She was wearing her coat but I'd bought that about four months ago and it's slightly too big. I bought a medium size coat thinking she would grow into it but she's now somewhere between a small and a medium size dog. Anyway the medium jumper seems to be a better fit than her medium size coat so it won't need to go back. We were able to take her again and have a meal although this was a a different town. It was lasagne, salad and garlic bread for me, gammon, egg and chips for hubby. The car passed it's MOT with flying colours so that was good but not entirely unexpected as we barely travel any long distances anymore. The staff told us they would have been able to drive us into town in our car and collect us in our car when it was ready so that's good to know for next time. One of the staff chatted to us for quite a while, showed us a photo on his phone of his slightly older and almost identical black cockapoo and it was clear he adored his girl as much as we love Tilly.

So it'll be Tilly's penultimate training session tomorrow and the week after that her fancy dress do. Her outfit has arrived and it's very nice but I've not tried it on her yet. Fingers crossed for a good fit and a restful week next week.