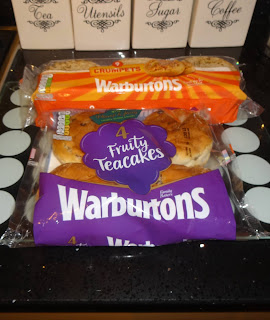 You may be wondering why I am posting a photo of teacakes and  crumpets. Well, they are a very kind gift from my blogging friend Eunice, you may know her from her Life In The Mouse House blog. I've met Eunice a couple of times before while she's been on her camping trips in my neck of the woods. I've also met Eunice's son who works for Warburtons and he actually made the teacakes but not those actual crumpets. I like to order a toasted teacake when I have coffee mid-morning when out on a walk and when the opportunity arises. Hubby is partial to crumpets and cheekily asked if she'd bring some with her but he was only joking :) Eunice had planned to surprise me a couple of weeks ago but the fuel "shortage" happened so she thought it wise not to run off the petrol she had in her tank. This week she phoned to tell me she was coming to visit me which I thought was lovely. She's staying on a campsite for the weekend just five miles from where we live and we'll see her again before she returns home. What a lovely lady she is.

I'd been to the dog training this morning and briefly met Millie again. She had to drop out of the last puppy classes as she'd been poorly and is doing the course again. Tilly is now in the beginners class so Millie and Tilly's paths only crossed briefly but it was nice to see her again. Tilly was praised today and it's clear she is learning fast and is far less excitable than when we started classes with Millie at the beginning of August.

When I returned home I'd had a questionnaire delivered from Macmillans about my cancer treatment and it took me just over half an hour to complete it and I'm happy to help them help others any way I can. I'd just sealed the envelope and was about to ring Eunice on her mobile when she pulled up outside the house. I've now met little Snowy and she's a lovely little dog and although I've met Poppie before it was nice to see her again . Of course Eunice has now met Tilly who was happy to have a tummy rub, that's Tilly's way of bonding. Forever friends :)