A meal for us today

My friend Eunice called again yesterday before she set off for home and we had another lovely chat. She takes such good photos I asked her if she would mind taking some of Tilly for me and she has emailed some smashing ones and I'm very happy and will be printing some out. I asked her if she knew how long we had been blogging pals for and I've suddenly remembered I had shown her a clip from the Welsh news of when the harbour bridge was officially opened and that was back in 2013 so that's at least eight years.

Today I have been to buy a Colin the Caterpillar cake for an upcoming birthday and I thought why have an ordinary caterpillar when a Spooky one would be even better! 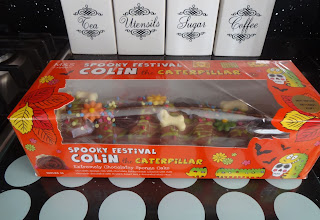 While I was on the retail park I bought some Christmas cards and gift wrapping paper and decided to go for a coffee with hubby. You may remember about three months ago we had an embarrassing time with Tilly when we went for something to eat. She was on the seat, on the table and she landed in and overturned a bowl of water and we made a hasty retreat. Hoping we wouldn't be recognised we returned to the same place and although it was much busier this time we were lucky enough to find a table for two which meant Tilly had to stay firmly on the floor. So not only did we have a welcome cup of coffee we actually stayed and enjoyed a meal and Tilly was as good as gold. We were well impressed with her, what a difference three months make. 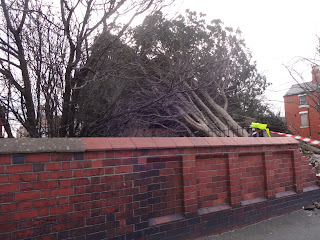