I went to a Macmillan coffee morning today by myself and I went there on the bus. I've never been to one of these fundraisers before and wanted to support the charity in my own small way. Waiting for the door to be opened quite a crowd had gathered. I found a table and it was explained that you went to the bar for a coffee and to help yourself to a cake from the table and put a donation in the collection box. Boxes of cakes were available to take home for a minimum donation. When I returned to the table a lady was sat in my seat but I was able to sit opposite her and we got chatting. Sadly she told me her husband had cancer and was too ill to be at the event with her. She was waiting for her friend to arrive and by the time her friend turned up I'd had my cup of coffee, enjoyed a small piece of ginger cake and chosen a box of cakes to take home. I was told all the cakes were homemade by the hosts which was very impressive. I didn't enter the raffle for a doll or enter the tombola to win a prize but said my goodbyes to the lady I'd been chatting to so that her friend could join her at the table.

I suppose I should have chosen a box with just six cakes in but having just enjoyed one at home with a cup of coffee I can tell you they are absolutely delicious and I look forward to enjoying more but not all of the rest....I don't think. I took the photo in the bus shelter while I was waiting for the bus to arrive and  even the bus driver commented he liked the look of my box of cakes. 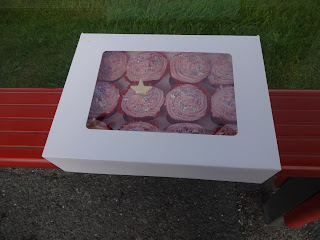 I can't remember without trawling back through my blog about how much or little I revealed about my own cancer diagnosis in March last year just as the pandemic and  lockdowns began. I had a very helpful telephone conversation with a lovely Macmillan nurse at the start of my treatments which initially my surgeon informed me thought may not go ahead because of the coronavirus pandemic but thankfully they did and I consider myself to be one of the lucky ones. Just this week I listened here to a well known TV presenter speaking about her own diagnosis and planned surgery, I think she's very brave for being so open and honest about her diagnosis and expressing her feelings. Although I don't have young children like she has, unlike her I had no history of cancer in my family at all so my diagnosis came as a total shock. I've decided I will tell a little of my story here.

I discovered my lump just by accident as I awoke one morning with my hand on my chest. I felt the lump and immediately I feared the worst. I'd had a letter inviting me for a mammogram  a couple of months prior to that dreadful day but had put it to one side as we had workmen in the house at the time and I forgot all about it. Thankfully I remembered I had this letter and telephoned the number and fortunately the mobile testing vehicle was still in place on a supermarket carpark and I was given an appointment for a few days later. A short wait for the results and I was then given an appointment at the breast test centre where I had a biopsy of the lump and lymph nodes and I could see on the mammogram myself it wasn't looking good and the radiographer sort of confirmed the diagnosis before I got the official results.

I had a 40mm lump and the cancer was also found in my lymph nodes. I was lucky that I only had to have a lumpectomy and a number of lymph nodes removed but unfortunately during my surgery they discovered another much smaller lump as well. I needed to have twelve rounds of chemotherapy although I missed the last one as I was reacting badly to it by then. The chemo was quickly followed by three weeks of daily radiotherapy treatments and I was unwell during that time but the treatments went ahead regardless. Losing my hair was another of the harsh side effects of the treatment and having to have district nurses coming to the house to take blood from and look after the line I had in my arm.  It's been a long journey made all the more difficult as I had to go it alone due to the coronavirus restrictions in the hospital so no visitors allowed.  I think it's only natural at the outset to think you won't survive this thing but I did and I'm here and I'll be eternally grateful for all the wonderful care I received. Ladies, please do check regularly for any lumps and know that there is so much support out there and the Macmillan nurses do an amazing job. I'm feeling much stronger now, I got through it during a pandemic too, how cool is that.