Hubby went for his second Covid jab yesterday and knowing he wouldn't be in the doctor's surgery for long I walked Tilly to the nearby postbox to post a letter. I was pleased to see the box had a topper which was obviously put on for Easter. Nice to see that it's still intact as some of the lady's toppers that she's made have very sadly been vandalised and it makes me wonder what is wrong with some people who have to mindlessly destroy things. The letter wasn't important so if it doesn't get collected until Monday then no matter. 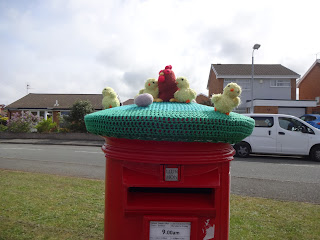 We then went into town and we came across hubby's brother and his wife who were resting on a bench in the town centre. My sister-in-law and I went shopping in a nearby store and left the two brothers chatting and she kindly bought a toy for Tilly which kept her quiet for at least half an hour when we returned home. I also called in the jewellery store to buy a watch for hubby's birthday as that was what he finally decided he wanted.

The painting of the top half of the downstairs cloakroom is now all finished and I'm pleased with the result. I like the shade of grey paint I bought and as I'd purchased a large tin of the one coat emulsion which was better value than buying a smaller tin to do the job there is plenty of paint left over. I now plan to use it in the utility room so that's the next unexpected job on the list for next week. It's all worked out cheaper than paying the tiler to do the job in the cloakroom and I'm actually glad we reverted to plan A which was to have it half tiled and the top half emulsioned. 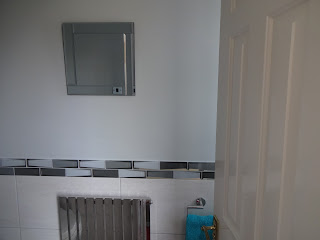 The wall above the radiator was crying out for a new mirror and I'm pleased with the art deco style mirror  I chose. Hubby said he didn't like it at first but now it's up on the wall he agrees it goes well in there. You can just see the reflection of the light switch in it and at least I avoided my own reflection while taking the photo :)
I took Tilly to the big park today and it was like a re-run of the last time I took her there when the heavens opened as soon as we'd arrived there. I'm getting so fed up with this strange unpredictable weather we're having recently so staying at home and doing some painting seems to be just the job.
at May 14, 2021