I've been busy over the last couple of weeks what with appointments at the dentist, the eye clinic and the general hospital. We also spent a very pleasant afternoon with hubby's brother and his wife sat out in their garden in the lovely warm sunshine and as brother-in-law had not long come out of hospital having a pacemaker fitted it was a good visit especially as we hadn't seen them in over a year. It was late when we arrived home so we called at the takeaway for food and the wait was horrendous. We discovered it's best to phone through an order as those who'd come to collect their food came and went while I was queuing for about forty minutes with people who didn't socially distance themselves and one lad who decided it was a good idea to lean on our car.

We've almost given up on the tiler returning to tile the top half of the cloakroom so we'll give him until this weekend and then revert to plan A and I'll paint the top half a pale grey colour as we'd originally intended. Talking of workmen we have had more trouble at the mill with the owners of the house next door. The tenants are lovely people but thinking the boundary issue of three years ago was all done and dusted which  it is legally they've decided to ride rough shod over us once again and we don't know what's going to happen next. At least Tilly discovered her bark and we know we have a good little guard dog in the making.

I've taken Tilly to the harbour a few times and met up with a friend who'd also lost her dog since the last time we'd met. Our friend was there waking her neighbour's dog and it was good to have a good long chat with her. I'll end with a few photos of Tilly in the boat so you can see that she is growing up fast. It's always busy at the harbour now and it's lovely to be able to sit out in the sunshine with a takeaway coffee and they even supply nautical themed dog biscuits :) 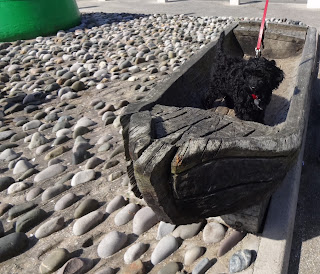 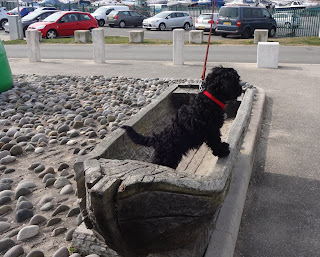 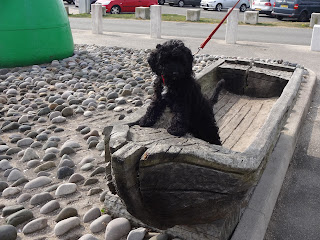 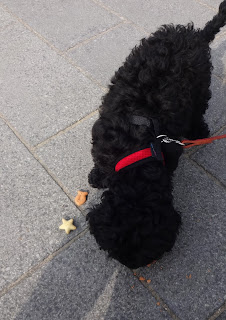