Don't faint but two blog posts in two days! :-) I had a phone call yesterday inviting me to go for my Covid vaccination today and I gratefully accepted. Although hubby is in the same age group as I am there was no persuading them to allow him to have his vaccination at the same time, nope no queue jumping allowed. I was the chosen one as I was put in the shielding group while I was having chemotherapy and my immune system was suppressed. Hubby will just have to wait his turn.

We had to go to Llandudno for the jab and as we had arrived far too early we bought takeaway coffees to drink in the car. You may have heard about the goats taking over the town early last year during the first lockdown, well I spotted two in the churchyard close to the cafe but they weren't too keen on having their photo taken and kept running away from me so this photo is the best I could do. 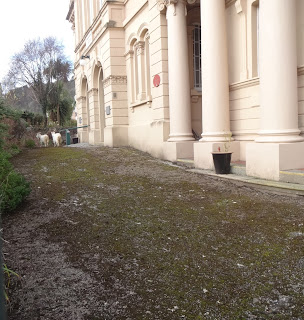 On the promenade in front of the rainbow hospital is a nice sculpture of a goat but the seagulls don't seem to approve and have used it for target practice. 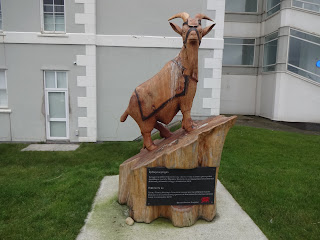 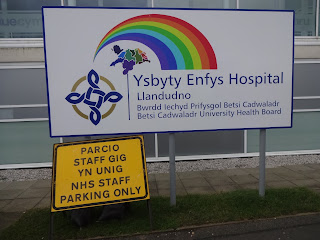 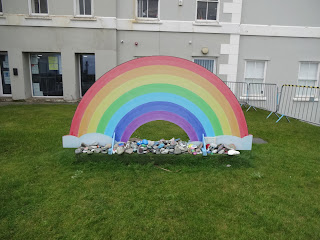 The whole thing is done with military precision, army personnel and volunteers herding a big queue of people along. I had a very nice nurse give me my jab and the clerk checking my particulars was none other than our nephew so hubby had a nice chat while he was waiting for me. I'll have my second dose in about eleven weeks time. 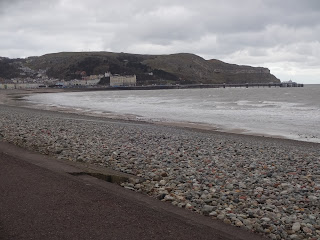 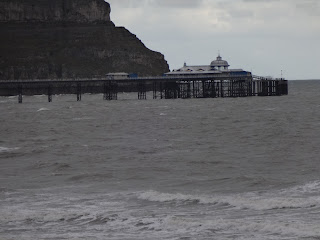 It was such a bitterly cold, grey day we were glad to get home but it was also nice to have had a day out of the house and a change of scenery.

Email ThisBlogThis!Share to TwitterShare to FacebookShare to Pinterest
Labels: Day out, Health, Hospital