I've been waiting since the end of April to have Ann's two paintings professionally framed. So wearing my medical grade mask I've ventured into town twice this week, first time to drop off the paintings and again today to collect them. I chose the brown frame for Annie and asked for red for the campervan painting. The framer only had one length of red frame and today he told me that although the frame looks good from the front the corners weren't up to his usual standard and so he very kindly refunded me the cost of that one and so it's been framed for free. I had originally intended for the campervan painting to go in our conservatory but have now decided it is far too hot in there for an oil painting so it's joined some of Ann's other art work in our living room and I think it looks good there in that little corner. To say I'm thrilled to bits is an understatement. 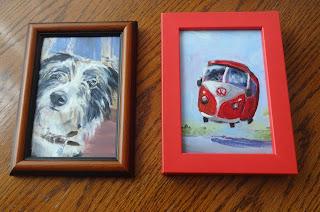 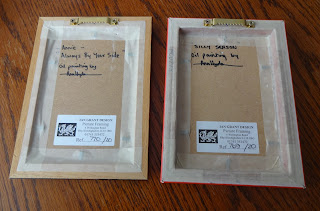 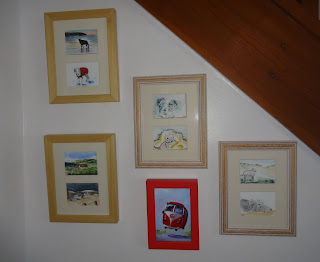 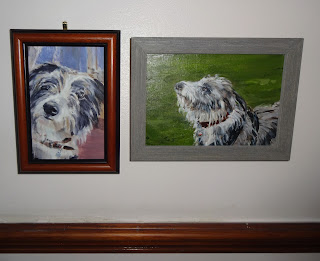 Annie alongside another of Ann's fabulous paintings of her

I've been shielding at home since March, not seeing anyone and not wanting to leave the house or be around other people, only leaving home to attend hospital appointments. I know that I am vulnerable to the virus as I am only part way through my weekly chemo treatments and it's true to say I've been very wary about going into town and rightly so after today's ghastly experience which I'll tell you about.

After leaving the framing shop I went to the newsagents shop to buy myself a magazine.There was a group if three men outside the shop approaching people on the street supposedly raising awareness for mental health but had pink wristbands which I assume they were selling. One man came right up to me and I politely asked him to socially distance himself as I was a cancer sufferer. He took a few steps away from me and then turned and came back and rudely asked me if had I just called him an a++++++e. I'd said no such thing and I think he was just trying to intimidate me. The staff in the newsagents told me the men were upsetting a lot of people, many complaints had been made about them and they'd previously been there collecting money for a totally different cause. I decided to call in at the police station and the officer said he'd send a police community officer to speak to them. I was so glad to  return home and that'll be my last venture into town for the foreseeable future I can tell you. I've done what I'd been longing to do and that's have Ann's wonderful paintings framed.

Today my daughter has flown to Berlin for a ten day holiday. She had to go via Frankfurt as there are no direct flights due to Covid. She reported to us that at check in instead of thousands of passengers queuing across multiple lanes there was just her and the staff. I wish our town centre had been like that! Anyway, if you're reading this  from your hotel in Berlin Carol, have a wonderful holiday and please take care and stay safe.