I had a feeling this was about to happen, hubby's second DNA test has also failed. We can only think it's due to all the medication he takes, it could be a factor but who knows. He takes thirteen tablets per day and a weekly injection into his tummy. I did supervise him producing his saliva straight after getting up in a morning and before him eating and drinking, then filling the test tube up to the line. Let's hope it'll be third time lucky. 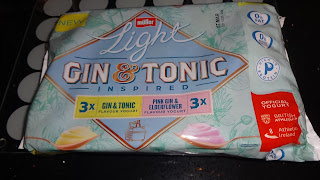 I have a fail of my own to own up to. I was tempted to buy these new flavour yogurts the other day. I tried one of the pink gin and elderflower yogurts today and let's just say I won't be buying them again. I'm not sure I'll be able to eat the other two so hopefully the gin and tonic flavour will be nicer although I doubt it somehow. I can't imagine who thought adding an alcoholic flavour to a milky yogurt would be a good idea anyway :)
at February 12, 2020

The waiting is almost over

Old habits die hard. I like to add a photo to each new blog post so these are the two apples I've taken out with me two days running...

Eileen
My name is Eileen. I'm a retired shop manager. My life is my hubby and my little dog Annie. We're living life in the slow lane.